The SCEE architecture thus is a hierarchy of trust that guarantees the electronic security of the State and the strong digital authentication of electronic transactions between the various departments and offices of Public Administration and between the State and citizens and business. 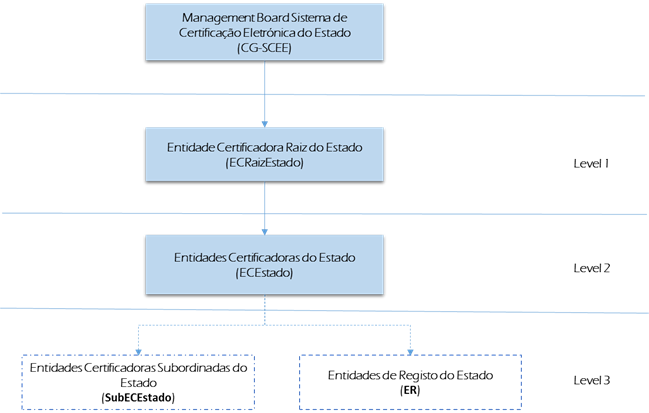 The SCEE operates independently from other public key infrastructures of private or foreign nature, but allow interoperability with infrastructures that satisfy the necessary authentication precision requirements, through appropriate technical mechanisms and compatibility in terms of certification policies, namely within the framework of the European Union countries.

The creation of SCEE was made with the respective adaptations, in accordance with all ruling national and Community legislation, in particular concerning the technical and safety rules applicable to certifying entities established in Portugal in issuing qualified certificates.

For the purpose, SCEE is composed by:

• Management Board that approve the integration or termination of certification entities in the SCEE also in answer to certification practices and policies;

• Entidade Certificadora Raiz do Estado  (StateRootCE) , which is the first level and the top of the certification chain of command;

• The subordinated certifying entities of the State (SubECEstado) , subordinated directly or multiple levels from one of StateCE;

• The registrar entities associated with each of the certification entities.

The entities authorized under SCEE, who provide qualified electronic certificates, in order to support the production of qualified electronic signatures, must necessarily comply with the minimum requirements set by the laws and regulations in force, providing for this purpose a set of functions / core services and optionally certain additional services.

Core services include: the Registry; Issue; Distribution; State of revocations and management of withdrawals. The additional services are providing device for creation of secure signature and the chronological validation.

The State Electronic Certification System (ECEE) – was created by Decree-Law nº 116-A/2006, of 16th June 2006, to assure the unity, the integration and effectiveness of the strong digital authentication systems in the electronic relations of individuals or legal entities with the State and among public entities.